The dream of Patagonia

Southernmost in Argentina, on the Chilean border, lies a collection of peaks that took our breaths away. We spent seven weeks here during December 2014 - January 2015, and are left with impressions and experiences that will last for many years.

We took a Helsport Trolltind Superlight 2 tent. An incredibly functional lightweight tent that we, without hesitation, recommend for alpine climbers and anyone else who appreciates lightweight gear. We also used Helsport bivvy bags for shelter during climbing trips. These bags turned out to be invaluable on the rescue we were involved in. 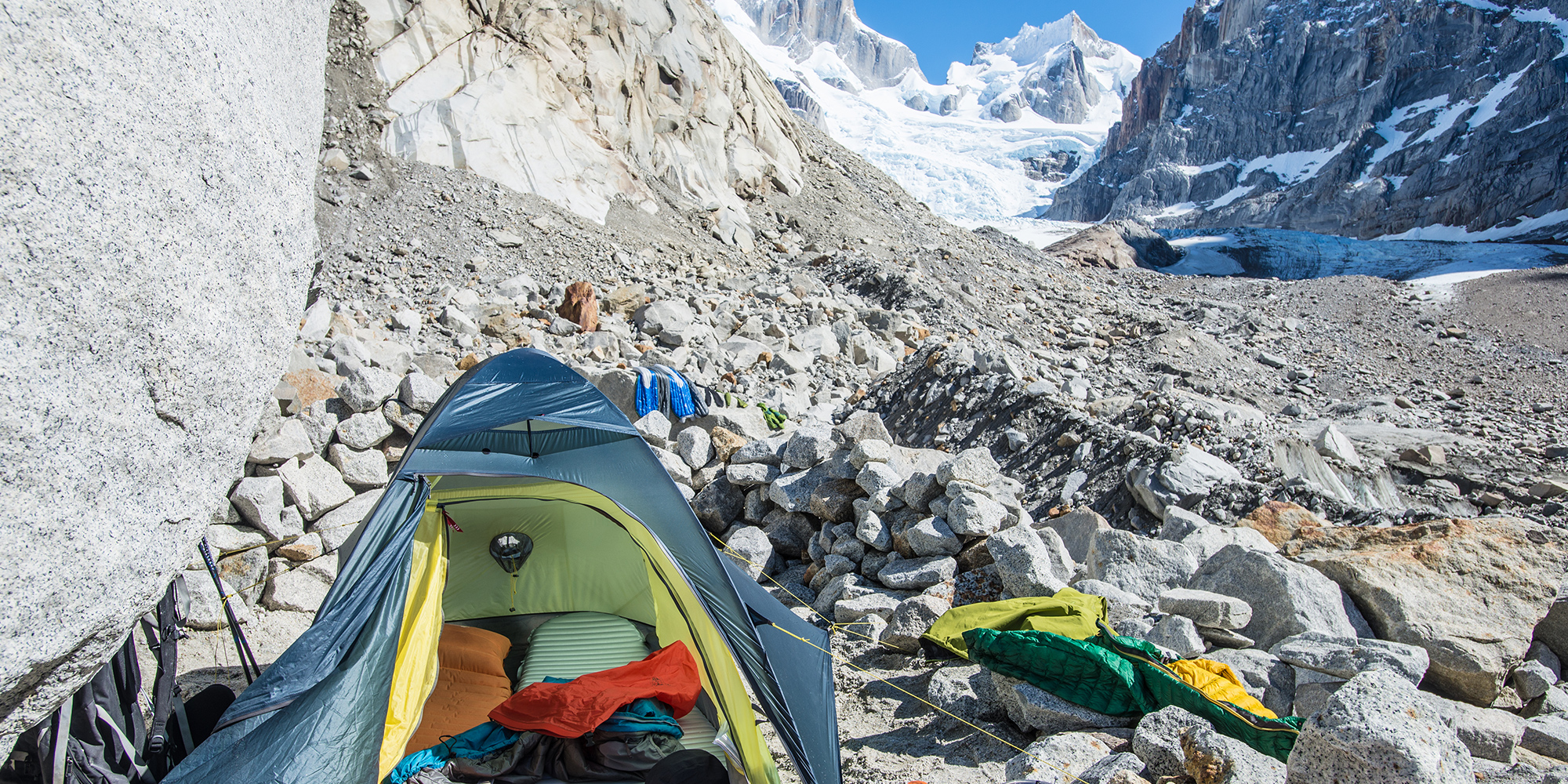 We arrived at the small tourist city of El Chaltèn at the foot of the mountains in the middle of the first proper weather window of the season, so had no choice but to fill our packs and head immediately for the hills. Despite brilliant sunshine our three-day journey from Norway had sapped our energy. After waking that first morning amidst the granite sea it soon became clear, for health reasons, that we had to shelve our plans. The next day, however, was eventful; in the afternoon we were contacted by a German climber, whose partner had fallen into a crevasse about three hours away from our camp.

The German climber told us that his partner had probably broken his leg, was bruised and somewhat confused. Luckily, we had a satellite phone with us, on loan from the Norwegian Alpine Club. This phone was now like gold: we used it to call the hospital in El Chaltén which coordinates the volunteer rescue group, so they could immediately begin efforts to get a rescue team to the mountains, while we could focus on reaching the injured climber.

Having packed our gear and coordinating a little with other climbers, we began the trip toward Fitz Roy glacier. After a few hours me, my climbing partner Lars Ottar Halvorsen and another German climber arrive at the crevasse and were relieved to see the injured climber, alive and conscious. We used a standard rescue method to hoist him out of the crevasse and laid him on a sleeping mat, inside a bivvy bag. Busy with this, it was a surprise when we saw spotted a small civilian helicopter appearing between the mountains.

Our relief was immense, however shortly afterwards the helicopter crash-landed about a kilometer from our position on the glacier, and the situation took a tragic turn. While we took care of the injured climber, a figure appeared out of the smoke from the direction of the helicopter. He came over to us and informed us that although he was relatively ok, the pilot was dead. 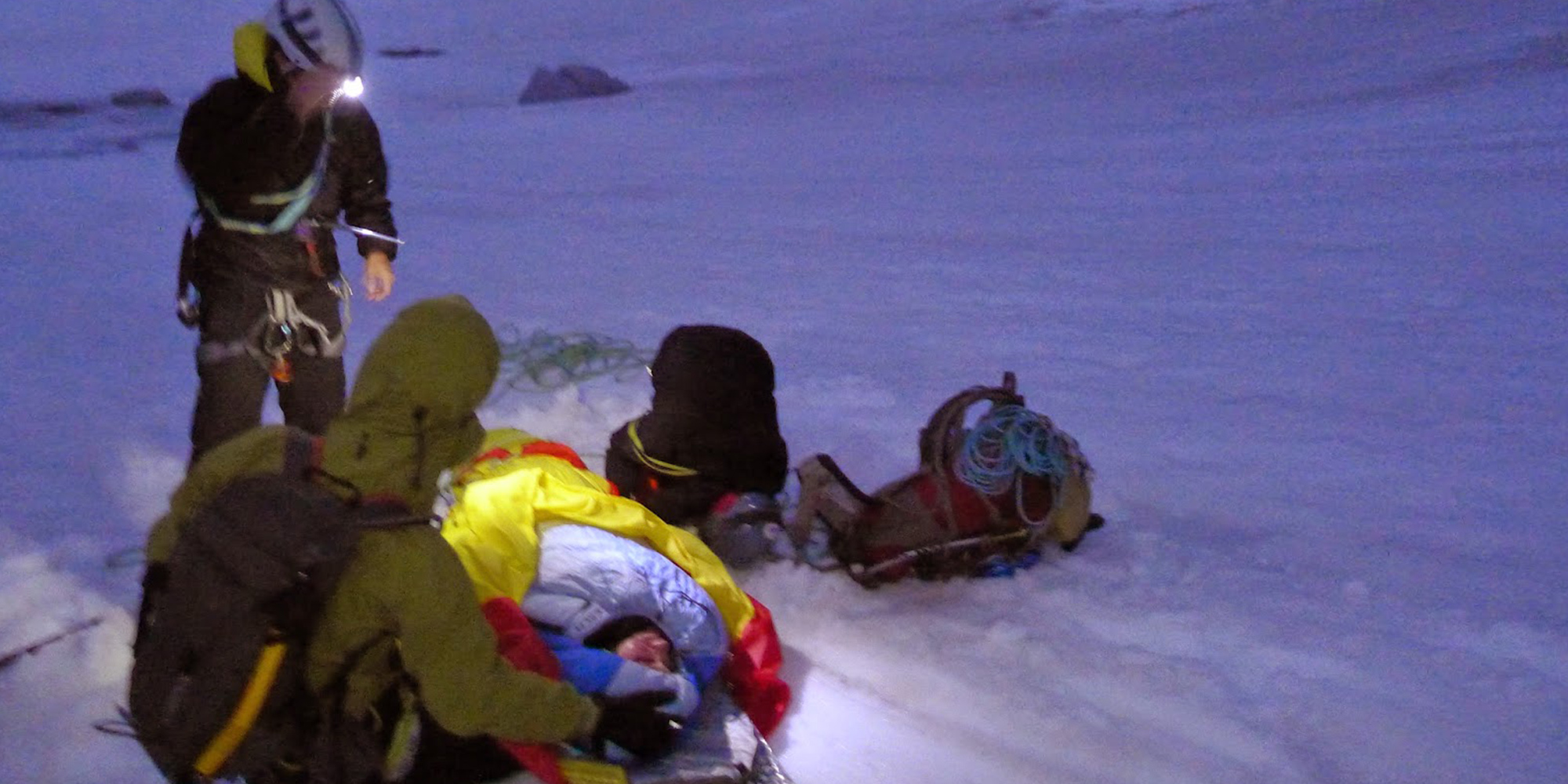 His name was Jimmy and he was the rescue team leader. Over the next few hours we worked together with Jimmy to transport the injured German climber over the majority of the glacier. Just on dusk we met the rest of the rescue team, who had walked from the nearest road, about 6-7 hours away.

The 30-person rescue team took over care of the climber, and worked through the night to get him to the hospital for treatment and onwards home to Germany. 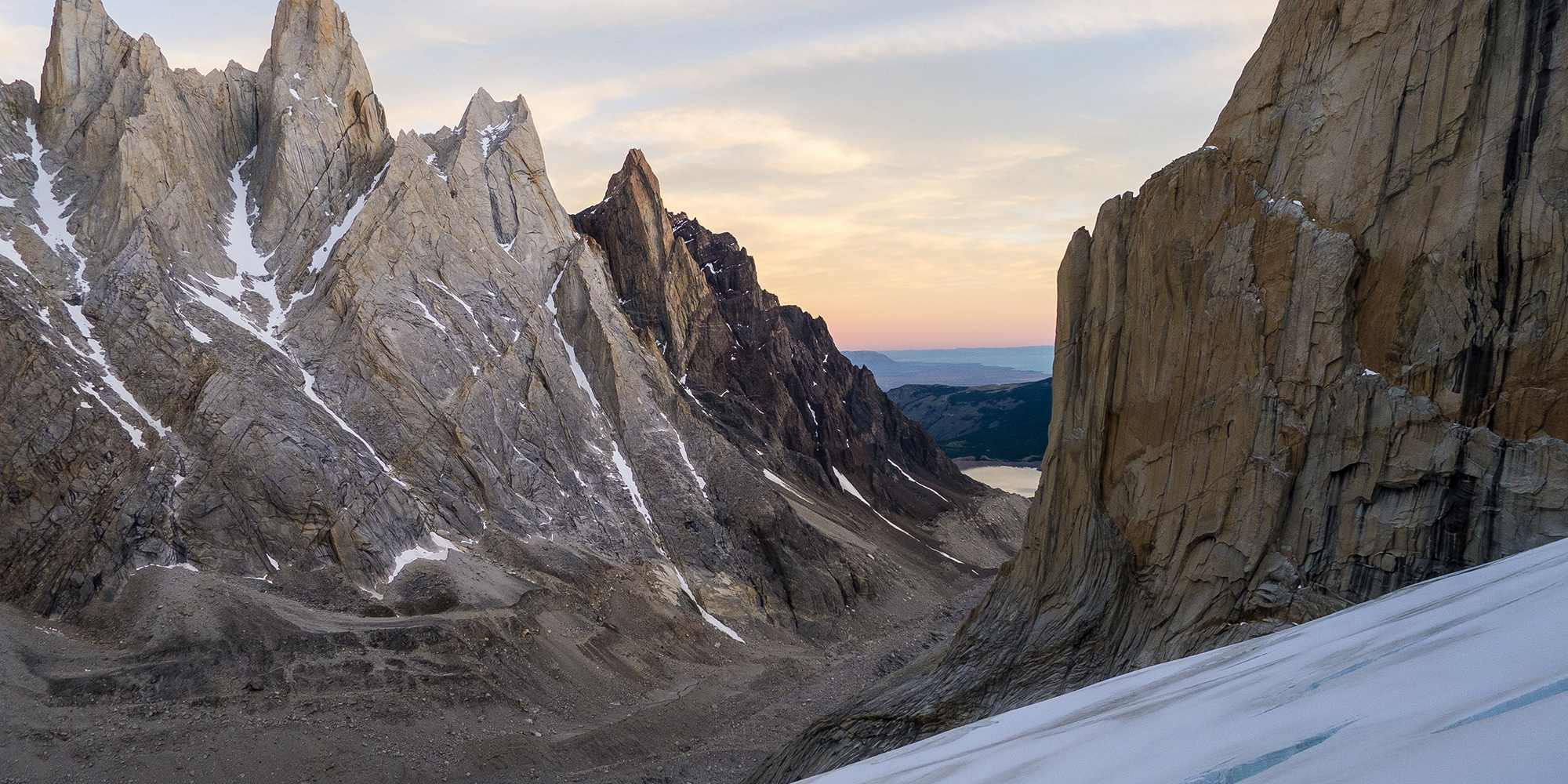 We'd had a dramatic start to our trip, but after a week of reflection and meeting the others involved, we began to think about climbing again. A small weather window of around 24 hours was heading our way, but unfortunately Lars Otta was now sick.

Luckily I joined up with Tromsø climbers Joel Frans and Jonas Jakobsen and we had a great climb on a granite spire called Aguja Guillaumet, north on the Fitz Roy massif. Lots of fresh snow and challenging conditions, so we climbed the "Coqueugniot – Guillot" route, which followed a relatively straightforward snow and ice channel, before climbing along the ridge to the top at 2580m. 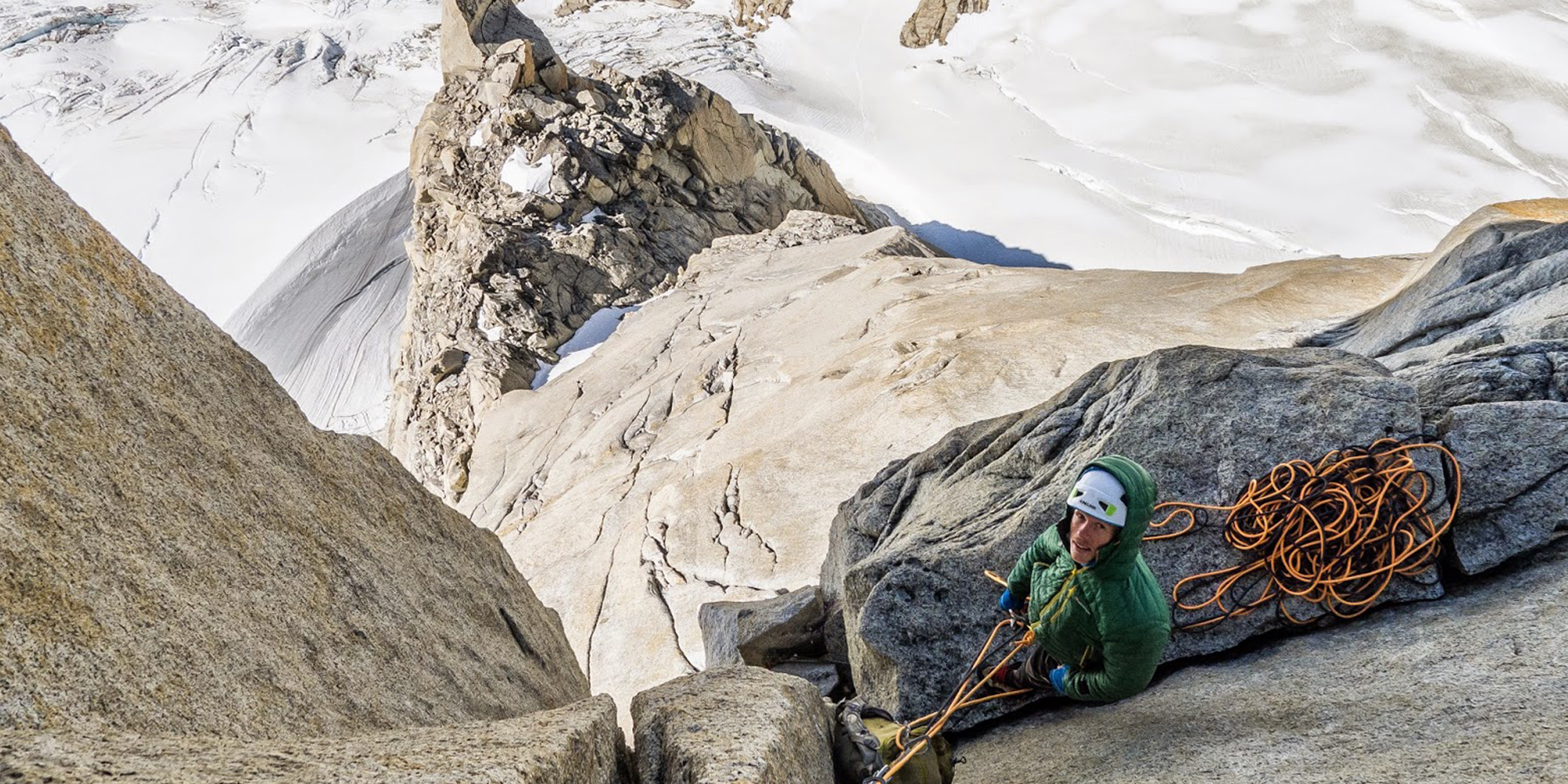 The weather in Patagonia is known to be challenging and it's not unusual to spend a whole month waiting for climbing weather. To have had a great climb already after just one week was a huge relief, but there was more to come.

Around the New Year a more promising weather window appeared in the forecast and we began to get ourselves ready. This time we were going to try and climb the local giant, the 3405m high Fitz Roy. Our fellow Norwegians Lars Martin Solberg and Endre Vonheim were also planning on climbing Fitz Roy, so we ended up combining resources.

The trip in was long and crossed a snowy glacier, so it was good to be able to share the snow-clearing work. On New Year's Eve we climbed to a saddle at 2600m and set up a bivvy. After a few hours of rest in spectacular surroundings three of us attempted a route called "Californian", but had to turn back due to demanding free climbing, lack of energy from the exhausting approach of the previous day, and limited food and gas supplies.

Turning around can sometimes be hard, but we felt confident that we'd made the right decision. Fatigue on the long return trip also showed how tired we actually had been.

Weeks of waiting for weather in El Chaltén rolled by and we spent our time either climbing or bouldering at local spots, playing cards, watching movies, drinking red wine and of course consuming copious amounts of Argentinian beef. During a short break in the weather Lars Otta and I also managed to carry our gear to a camp spot in Torredalen, ready for the next opportunity.

The days passed. Towards the end of January we had a fantastic weather window with warm temperatures and stable conditions, so it was with light packs and lively spirits that we headed for camp "Niponino" to reunite with our gear. After sitting out one rainy day that was longer and wetter than expected we sorted our packs and fulfilled all our expectations of this promised land - an indescribably superb climb on Medialuna, up one of the classic bolted routes "Rubio y azul". 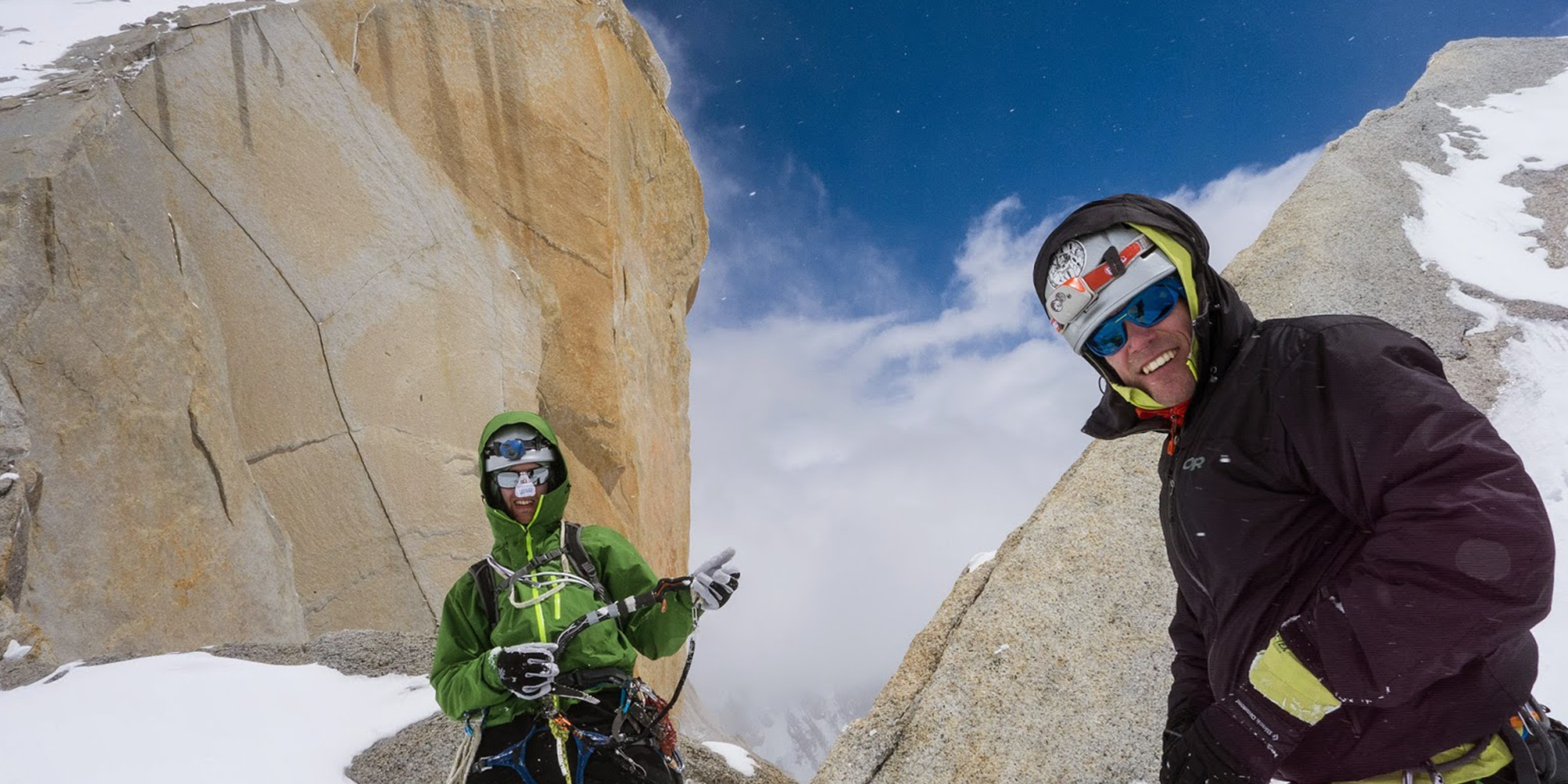 10 pitches long, this route has fantastic cracks, dihedrals and chimneys to climb. Conditions were perfect and we were two happy chaps in woollen t-shirts, sitting and dangling our legs at the top in the afternoon. Abseiling was a breeze and we were back at camp just after dark. The next day was blissful, spent chatting with climbers from near and far about adventures and dreams, while memories were being made in the mountains around us.