The outdoor hack that will give you Lofoten all to yourselves

We were going to Lofoten. Together with half of Norway’s population. It was in the middle of the summer holidays and perfect weather. We still managed to get the mountains all to ourselves. How? Take advantage of the midnight sun – hike during the night.

The time was closer to 7 pm once we adjusted our backpacks and started hiking towards Munkebu. The light had that extra warm glow and the shadows started to grow long. This time of the year the sun won’t set up here in the North – the night kinda just goes on like an endless sunset.

Close to the Munkebu cabin we decided to make a late dinner. The clock, as our only proof, showed that it was almost 10 pm, and we were about half way to our goal; Hermandalstind Mountain. We didn’t move very fast. We were in no hurry. The rush we had felt driving in line from Svolvær in the East heading West towards Reine, was long gone. We’d met the occasional hiker, but felt very much alone in the mountains this evening. 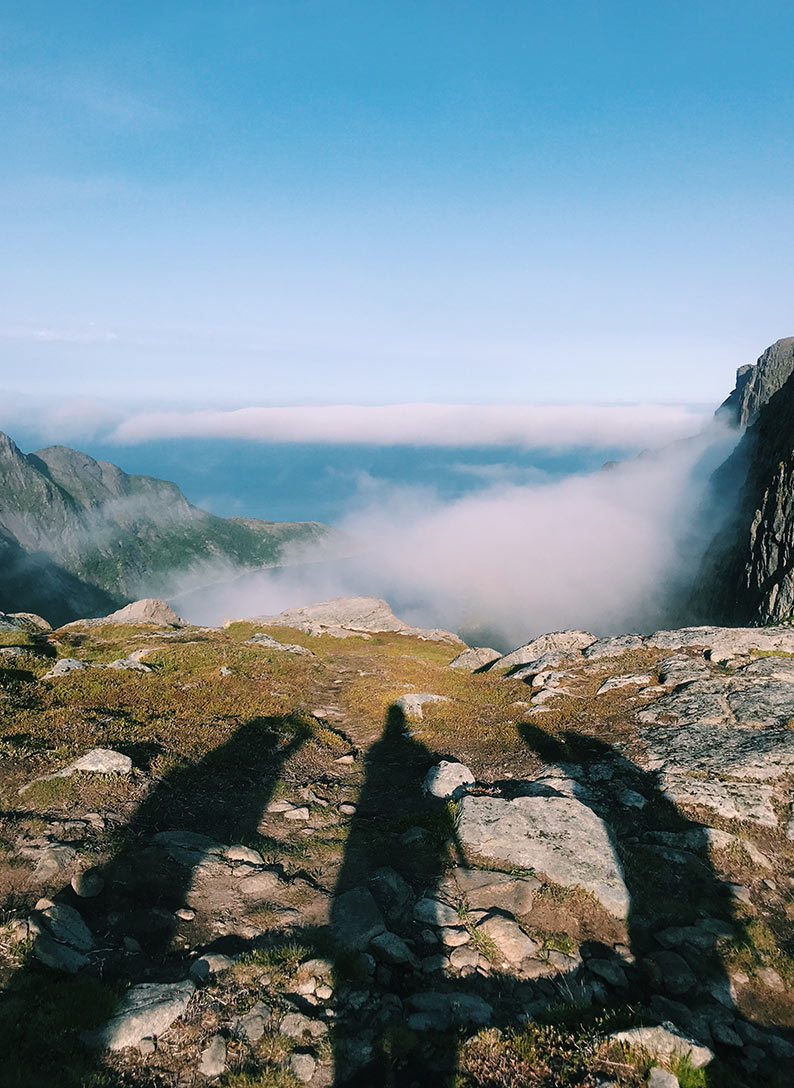 When we arrived at Krokvatnet before starting on the actual climb towards the top we decided to leave most of our luggage behind. We carried both tents and cooking supplies, but since the weather aspects looked calm we only brought our sleeping bags and some snacks for the actual top.

Hiking Hermandalstind Mountain is a beautiful trip and longer than the usual Lofoten hike, it somewhat reminded us of a piece of Jotuneimen – only surrounded by ocean. We reached the top about 2 in the morning, just in time to see the sun closing in on the horizon. The sea fog slowly crept in beneath us, and all of a sudden we found ourselves feeling so much higher than everybody else. Surrounded by only mountain peaks, the red sun and an ocean of fog. 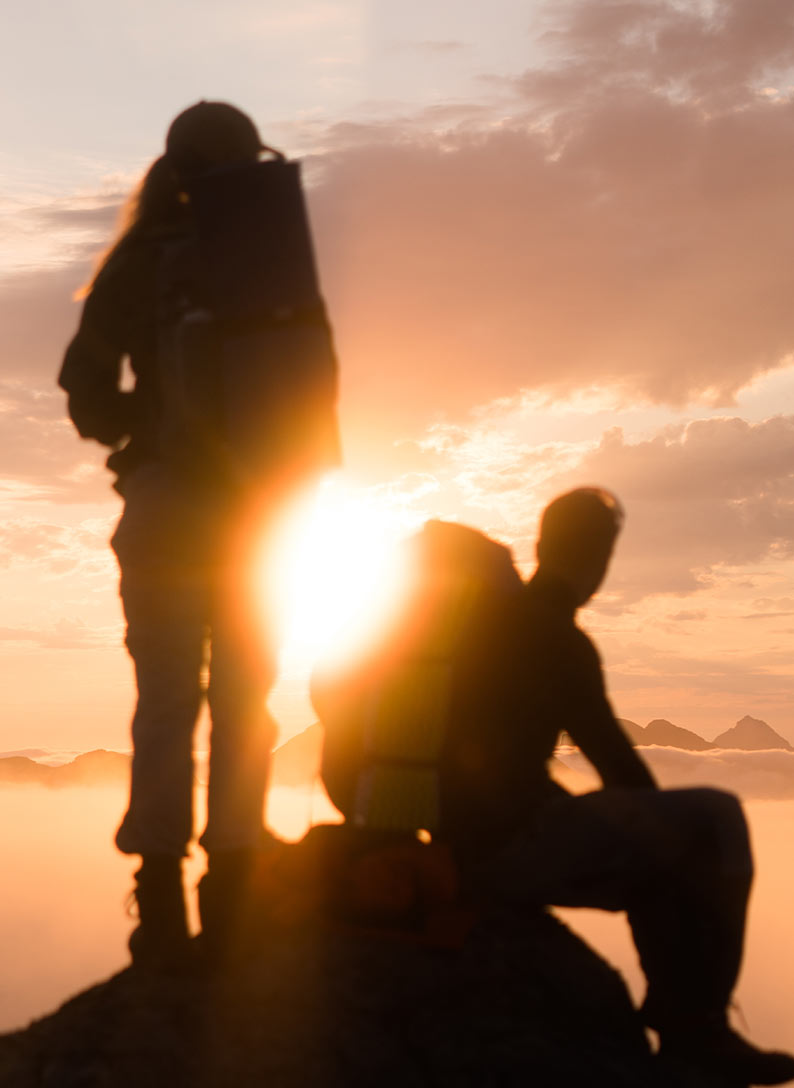 We snoozed for a while, but it was hard to keep our eyes closed. All alone, on the top of Hermandalstind mountain, in the middle of the busy summer holidays. No wind, just the midnight sun. After a couple of hours we packed our things and started to descend down into the fog. The light was crazy and it was like entering another world. 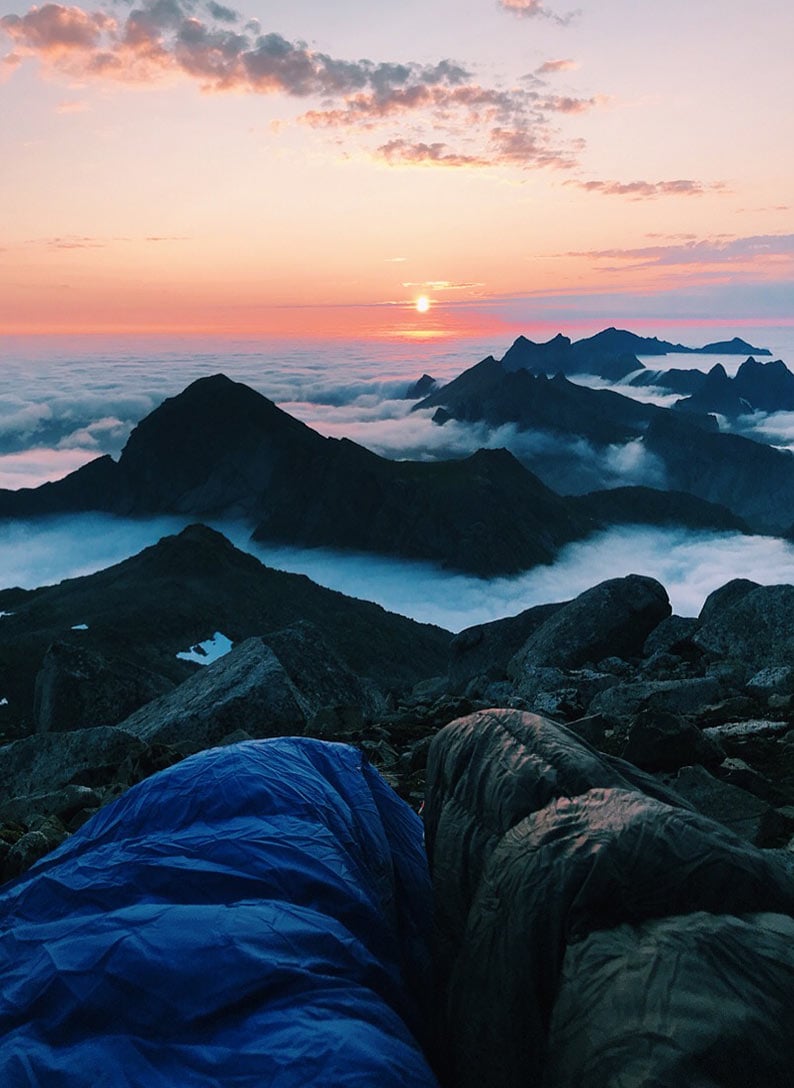 We fell asleep under the open sky, well down by the lake below. Brutally awakened by the sun some hours later. When turning the clock around make sure to find a sleeping spot in the shadows – as we forgot. The day was spent sleeping, going for an ice cold mountain plunge, drinking coffee in the sun before slowly heading back to our car later the same day. Ready for another adventurous night.