- I lost a lot of my income, my travel plans got canceled, and I was feeling down for some time, but like everyone else, I had to change my mindset. And I had to fill this time with something! I have always wanted to see the whole of Norway, and since I am quite a restless person, I thought it would be perfect to bike, instead of hike.

Thomas has some friends who have cycled the whole length of Norway previously, and after a chat with them and some planning, he set off from Nordkapp on July 5, with plans to spend 30 days on the bike to Lindesnes.

- The trip will consist of some detours, to combine it with my interest for hiking, and to see some of the natural treasures we have in our country. 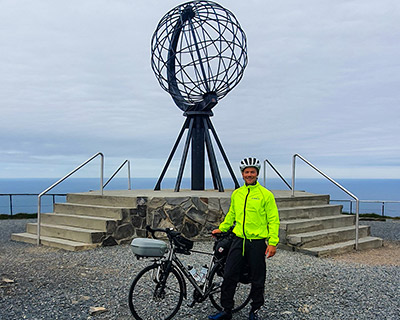 Never heard of bikepacking? It’s more or less the same as backpacking, just with a bicycle. Thomas has dropped the depots people normally send in advance if they hike Norway from north to south, and he plans to do his food shopping along the way.

- I’ve tried to pack as light as possible, hence, I had really just one option when it came to tents, and it was Ringstind Superlight one-person tent. I considered going for the two-person version, as it only weighs a little more, but now that I'm here I am impressed with how spacious it is for a one-person tent. It takes a minute and a half to pitch, and about the same to fold down, roll, stuff in the bag and cycle on. It’s perfect! 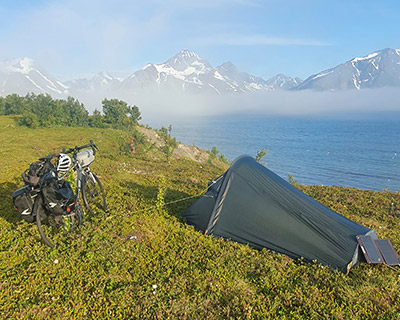 - And then I've eaten two kilos of lollies already! It's my body I'm a little worried about along the way. Blisters are painful, but the most important thing is to avoid inflammation. I've already taped my knees and Achilles tendon, he says.

Then he adds that one does not really have to be in such an excellent shape to go on such a trip, because the pace should be slow in the beginning.

- What I am most looking forward to is experiencing the wilderness along the way. I mainly bike alone, but get some company around Molde, and then I'll catch up with some friends along the way. I will visit many nice places; Lyngen, Lofoten, the Helgeland coast, where I will spend a day running the Seven Sisters, the Atlantic Road, Geirangerfjord and Trollstigen. These are places where I haven't spent much time previously.

He says that traveling in Norway is in many ways easier than traveling abroad. You are familiar with things, so you can relax more. Thomas also notes that Norwegians, who are usually perceived as a little cold and introvert, act completely different when they are out in the wild.

- When people understand what I do, they are so friendly and nice, and do everything they can to help.

Thomas’ advice for the summer holiday is to venture out of your comfort zone. What might seem a bit difficult there and then, can give you some great moments to cherish afterwards. And the most important thing is to: just do it!

- Don't stay home and plan everything down to the smallest detail. Instead, pack that packback and get out! Don’t procrastinate! Go out and explore, and it will become an even more memorable adventure!